By Unknown - October 06, 2014
“Alcatra” is a traditional dish from Terceira, the island I live on. It is a pot roast that is cooked in large unglazed red clay pots. The pots are seasoned, and with each use get darker, and darker.  The simple spices, combined with onions, bacon and wine are what make this dish  flavorfull and so good. "Alcatra" is the Arabic word for "piece", and  it is  made with pieces of beef (round, shank, chuck). The additon of meat with bone in, makes all the difference, as the bones will give it more flavor. Every village, and everybodies grandmother has a different recipe for Alcatra, this one happens to be my grandmother's version. Shortly after I married, I took all of my ingredients, a notebook and pen over to my maternal grandmother's house. Where, while she put everything together, I wrote down her words of wisdom. Now I must say, she may or may not have forgotten something, but I follow this recipe as is, I don't mess arond with it, it's her recipe, just how she told it to me. You don´t mess with perfection. Now I am lucky enough to have a brick oven, where I can cook Alcatra, just as my grandmother's did, but this can also be cooked in a regular oven. They key is a long cooking time, it's what makes the meat fall off the fork tender. As for the unglazed claypot (alguidar), if you don't have one, no worries, use a roaster, or a dutch oven. Alcatra is not only restricted to meat, they can also be prepared with chicken, fish, rabbit, goat, beans and even octopus. Traditionally is was simply served with sweet bread (massa sovada), but there is no harm in serving it with some rice or potatoes. Don´t be put off by all of the photos, I just wanted to give you a step by step of how to put it together. It really is a simple dish make, but the end results are out of this world. I finally got it all translated, and on the blog. I have been asked so many times for the recipe... I am so proud to share it with you.  I hope you give it a try ! 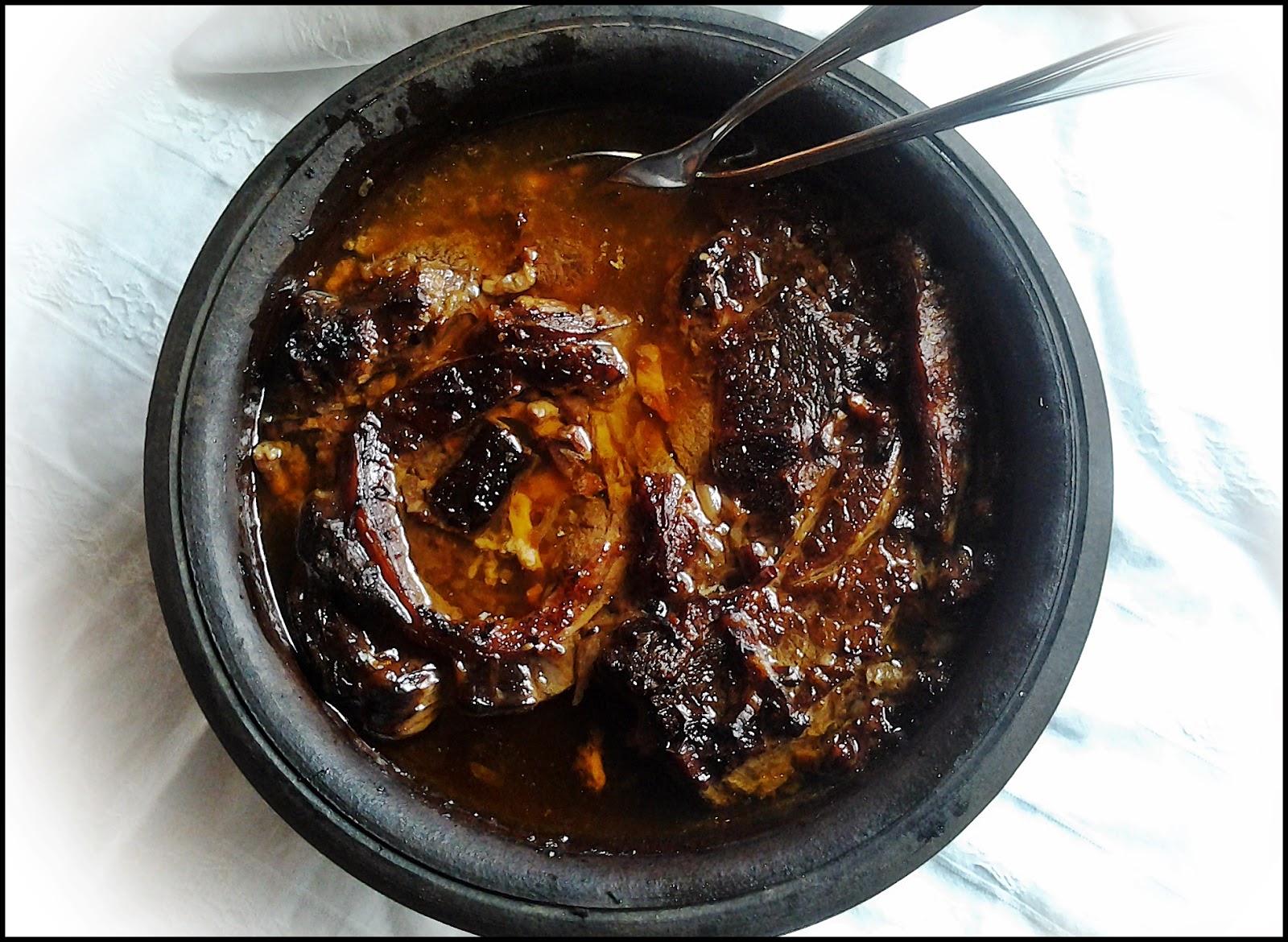 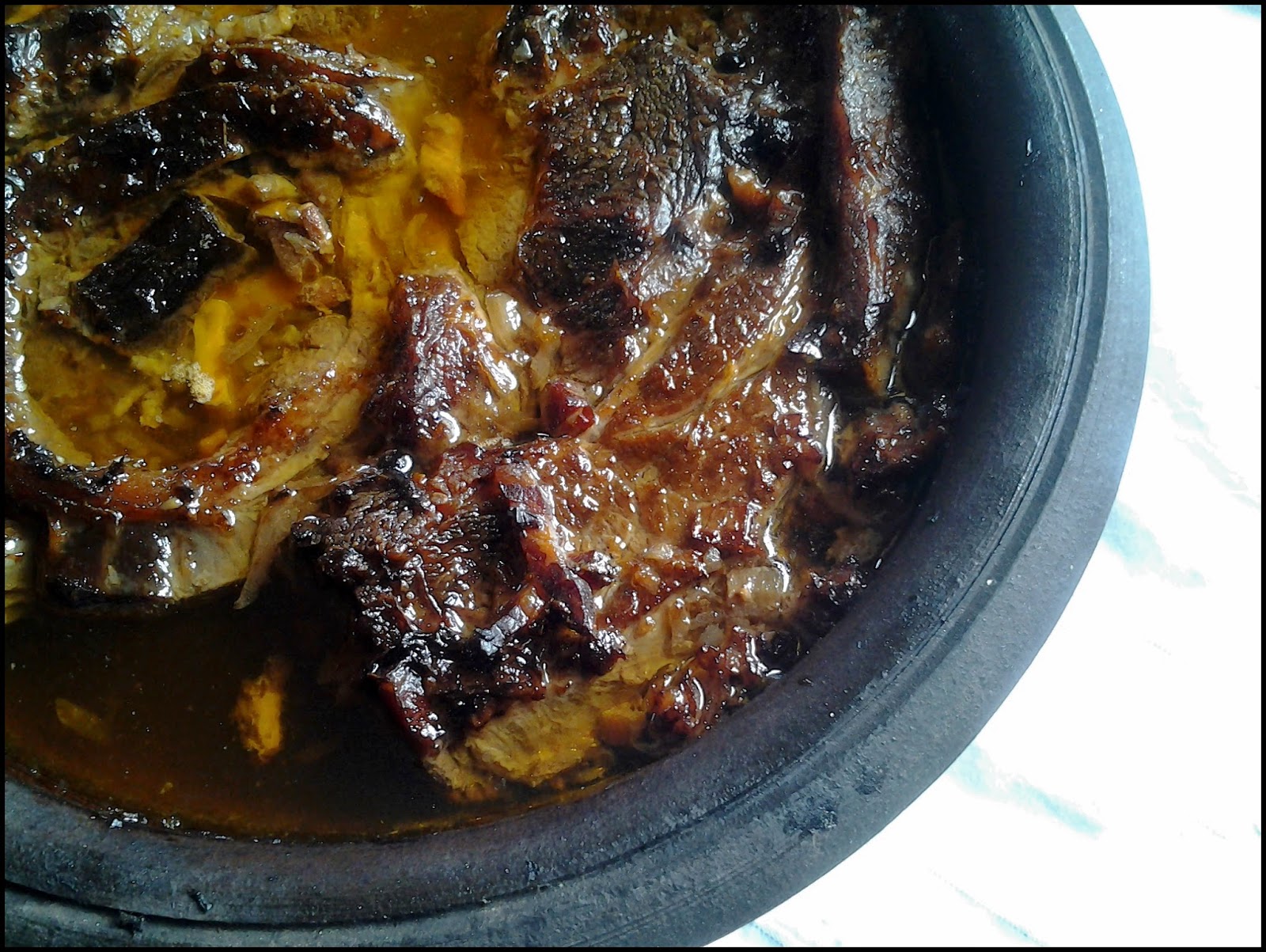 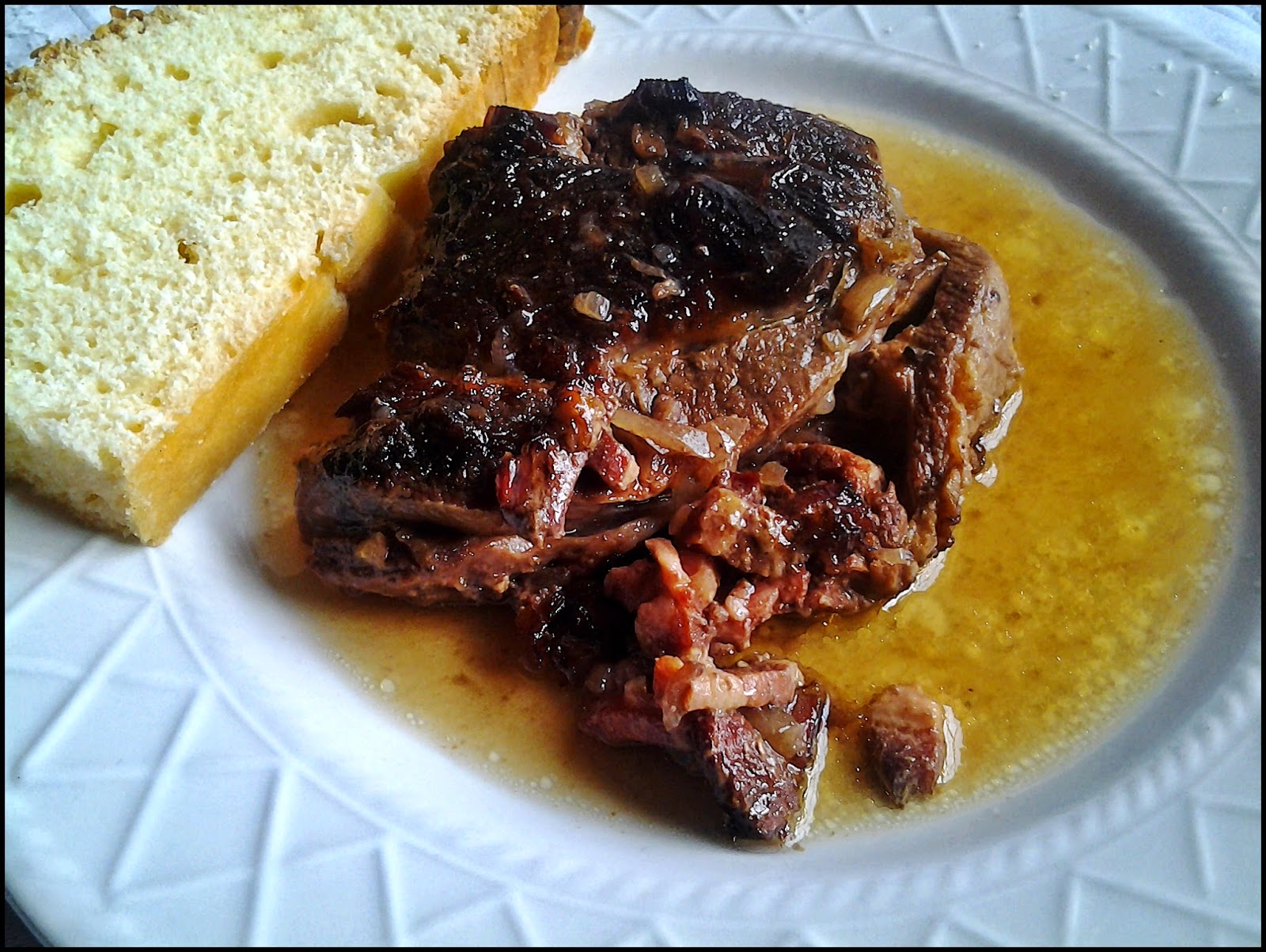 
Preheat the oven 400ºf
Wash the meat you are using with some of the wine you will be using and some bay leaves.
Grease the claypot with some lard or butter.
To the bottom of the claypot, add 1 tablespoon sea salt, 1 bay leaf, 8 whole allspice.
Next add half of the bacon and half of the diced onions.
Next add your meat, starting with the bones at the bottom of the pot, and working your way up, fit all the pieces in the claypot.
Next add the remainder of the bacon, the onions, and the 14 remaining allspice, fill in the side of the claypot, and covering the meat on top also.
Add some knobs of cold butter now.
Next mix your wine with the water, 2 measures of wine mixed with one measure of water, you might have to do this more than once, extra liqid is alright to have, for adding to the Alcatra while it cooks.
Take the liquid and fill up the claypot, using a knife to lift the meat, making sure there is no air pockets, and it is filled with liquid, up to the top of the pot, covering the meat if possible.
Next cover with aluminum foil, poke some vents in it.
And place in the oven, it's not a bad idea to place it on top of a cookie sheet of pizza pan, in case the liqid boils over ( always does).
I look to cook my Alcatra for atleast 7-8 hours, I cook it for3 hours at 400°F, then turned the oven down to 325°F and cook it the remainder of the the time.
During cooking, check to see if there is still liquid, if not add some of you wine and water mixture.
In the last half hour, uncover the claypot, and let the top brown. ( My grandmother would actually flip the meet over halfway through cooking-- this I do not do, the liqid is really hot, and it just scares me).

** red wine can also be used, but will make the meat and gravy darker

**A new, unglazed clay pot needs to be seasoned to avoid passing an earthy flavor to food. To season, fill the pot with water and add several cabbage or collard leaves and some onion peelings. Then place the pot on a flame-proof diffuser over medium heat. Bring to a boil then reduce to a simmer. Simmer for about 2 hours and then drain.

**When you want to cook in the pot,for the first couple of time... immerse it in water and soak for about 24 hours. Then proceed with the recipe by generously greasing the interior with butter.


** I hope I haven´t left anything out, please feel free to ask questions in the comments, and I will try to help you
alcatra Azores meat portuguese Terceira traditional

Popular posts from this blog 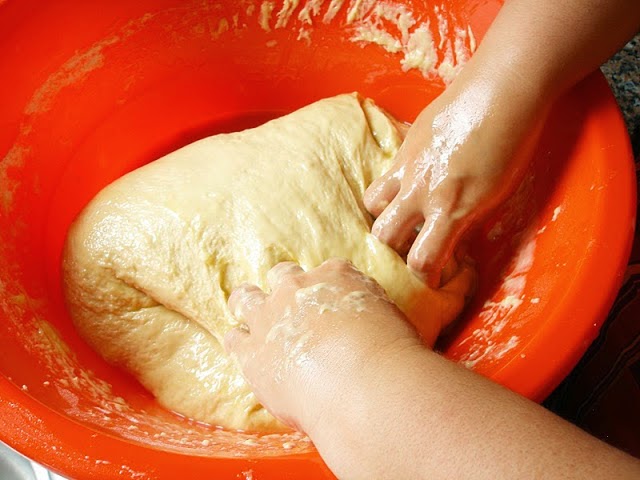 I almost did not bake any sweet bread this year for Easter, I had so many things to do, preparing for our daughter's communion, which was celebrated also on Easter  Sunday. I kept talking my self out of it, but in my heart I knew that I would kick myself for not baking any. My kids had asked all week, when are you making the "massa sovada", to which I kept responding, "one of these days". I made it Good Friday, which I must confess, did not sit well with me, because that day, is a day of  reflection and quiet, surely the Good Lord will not be to upset with me. I grew up with my mom, making "massa sovada", she would even let us help out (sometimes) and I now know why only sometimes, little hands sometimes get in the way of speeding things up. The thing is,she never used a written recipe, it all came magically from her head. This  led me on a search for a recipe for sweet bread, and I finally found one, that I can follow, but make my own way "magica
Read more 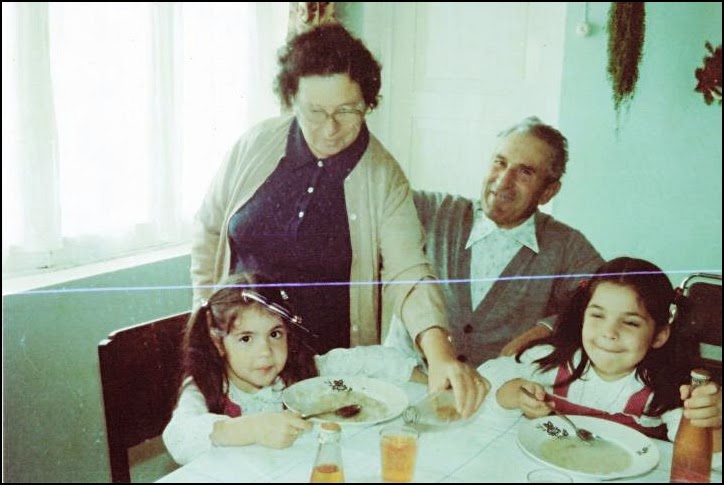 Canja is my favorite soup in the whole entire world! I know that sounds childlike, but that's exactly how I feel when I eat this beautiful rice and chicken soup. It just takes me back to being a little girl, sitting at my grandfather's kitchen table, eating a bowl of my grandmother's canja and drinking a bottle of  fizzy orange pirolito. When ever we arrived here on the island for our holiday's, canja was one of the many dishes, that was part of the big family lunch at my maternal grandparent's home. I make it for my family because they enjoy it, but I tend to make it for myself when I am a little under the weather, or just feeling saudades. Canja is love in a bowl, like a great big warm hug, comfort at it's best. Like any portuguese dish, there are a million and one ways to make this. Some call for the use of cumin, others the addition of potatoes. This is how I make it, these simple flavors, are the closest to what my grandmother's  and my mom's Ca
Read more